My very own ‘Victory Garden’. While WWII is over and victory gardens seem a thing of the past, home gardening continues to grow in popularity. Whether you credit the economy, a more health conscious generation, or the chance to proclaim: “I grew it myself”, there is no denying the appeal of freshly vegetables at hand. My head swimming with memories of my Media and the Environment Journalism class – focusing on Community Gardens, I was ready to begin planning. I learned a lot about urban agriculture from KCCUA and looked to square foot gardening tactics to maximize the diversity of my garden.

I planted the first round of seeds 5 days ago. When the morning began the bulls blood beets had sprouted. By this evening 9 of the 16 seeded squares has tiny shoots popping out of the ground. I can’t wait for the rest of my seeds to arrive and see what sprouts next. 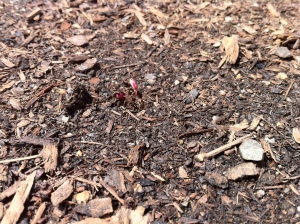 The usual stand-by for mushy brown bananas has always been banana bread. May I present to you a semi-healthy delicious alternative: Banana-Oatmeal Chocolate Chip Cookies. Plucked from the July 2009 issue of Cooking Light, nutritional information can be found here.

Preheat oven to 350˚. Combine first 5 ingredients in a large bowl; beat with a mixer at medium speed until smooth. Add egg; beat well. In a separate bowl combine flour, oats, baking soda, and salt; mix with a whisk. Add flour mixture to banana mixture in a bowl a little bit at a time; beat with mixer at medium speed until well blended. Stir in chocolate chips. Drop batter by heaping tablespoonfuls 2 inches apart onto baking sheets coated with cooking spray. Bake at 350˚ for 15-18 minutes or until golden. Cool on cookie sheets for 2 minutes then transfer to wire racks to cook completely.

Quitting my job and moving home was a hard decision, but it was definitely the right move for me. While I haven’t found my new calling, I’ve been keeping busy. Take this evening for instance, I came home from making enchiladas with the neighbors, found some recipes my mom had printed, donned an apron, and began to bake. My favorite cookie of the evening was a chocolate molasses ginger cookie. This recipe came from the October 2007 issue of Sunset – I added crystalized ginger to the batter to give it a more distinct ginger taste.

In a large bowl, beat 3/4 cup butter and the brown sugar until light and fluffy, about 3 minutes. Add molasses, egg, and vanilla; beat to combine.

Mix in dry ingredients gently but thoroughly, scraping down sides of the bowl as necessary. (Batter will be thick.) Stir in chopped chocolate until well combined.

Form batter into 2-tbsp. balls, roll each ball in granulated sugar, and place 12 balls on buttered baking sheet at least 2 inches apart (they will expand). (If batter is too sticky, dampen your hands with water when forming balls.) Dip the bottom of a cup or glass in water and use it to flatten balls to a thickness of about 1/4 in., rewetting glass as necessary to prevent sticking. 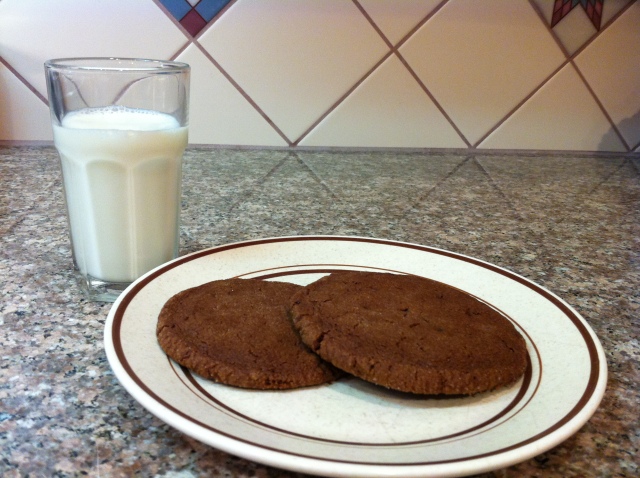 Enjoy with a cup of tea or glass of milk.

A new smoker in the backyard means one thing. Meat. Pork butt, chicken, ribs – if it moos, clucks, or oinks, it’ll soon make an appearance in the dinner rotation. I’m not one for the carnivore diet so last week’s ribs were accompanied by a plethora of veggies. Beets, brussels sprouts, green beans, and salad all made an appearance. 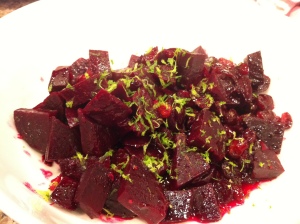 Clean and remove the tops of the beets and place in a pot filled with cold water. Heat slowly to boiling. Once the pot reaches a rolling boil reduce heat and simmer uncovered for 25 minutes until barely tender. Remove just enough of the beet liquid to cover craisins in a small bowl and let stand for 10 minutes. Drain off the remaining beet liquid and rinse under cold water. Remove skins – I like to wear rubber gloves so my hands don’t end up stained red. Slice beets, drain craisins, and set both aside in a bowl. In a large skillet melt butter over medium-low heat. Stir in grated ginger and cook for 5 minutes. Add reserved beets, craisins, sugar, and vinegar. Cook until heated through and sprinkle with lime zest.

Super fast and super easy, this favorite dressing goes well with all sorts of salads.

Combine all ingredients in a jar or container with lid (a mason jar clean pasta sauce jar works well). Shake until blended. Refrigerate until serving time. Makes about 1 cup. 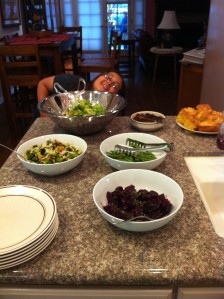 A tale of two pies.

Last summer I visited the North Eastern part of the United States for my cousin’s wedding in Vermont. We went to Ben & Jerry’s (pretty disappointing), the Eric Carle Museum of Picture Book Art (absolutely amazing!) and a few other random places like King Arthur Flour (a bajillion and one different types of flour). So when my cousin posted a link on facebook for a Cranberry-Fudge Pie recipe from King Arthur Flour, I knew I had to give it a go (especially since every other status message she puts up has to do with drool-worthy dishes). 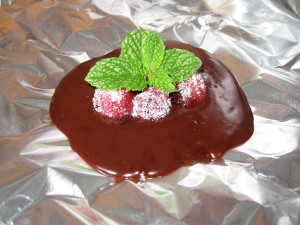 I ended up making this pie twice in a 3-day period (both had been devoured by the next day – a testament to my cooking, to the recipe, or to the hungry masses? Who’s to say). The first pie was more true to the original recipe. The only change I made was to leave out the dried cranberries since I’m personally not a huge fan. I also took the leftover fudge and made a pie topper with sugared cranberries and mint. Everyone seemed to love it, even folks who “hate fruit baked into things”.

My mom heard about pie #1 and was sad that I didn’t save her any so when I went home to visit the next day I decided to make another. I got more creative with pie #2 and it was way better than pie #1 – you can find my version below.

I began with the cranberry layer, as it needs to cool before it can be put on top of the chocolate. Bring the following to a boil:

Add a 12-ounce package (approximately 3 heaped cups) of fresh cranberries to the pot and continue to boil for 8-10 minutes. All of the cranberries will pop and take on a slightly wrinkled appearance. Remove the pot from the stove and set aside – the mixture will thicken as it cools.

During the 8-10 minutes while the cranberries are boiling I began working on the graham cracker crust by mixing:

A cellophane package of graham crackers conveniently yields the proper amount of crumbs – I like to empty the package into a large Ziploc bag and use a rolling pin to pulverize the graham crackers. According to King Arthur Flour, using powdered sugar gives a “slightly softer, crumblier crust, perfect for a pie that’s going to be refrigerated.” Once the three ingredients are combined, press the mixture evenly into the bottom and up the sides of a 9” pie pan. Place the crust in the oven for 7-8 minutes until it is set and slightly browned along the top edges. Place on a cooling rack for later.

If you do not have ¾ cup of chopped toasted pecans, now is the time to chop those up and throw them in the oven. Lower the temperature to 350˚ and bake on a foil covered cookie sheet for 8-10 minutes.

The fudge/ganache layer: if you have a large glass liquid measuring cup pour in 2/3 cup of heavy cream and add 1 cup of semisweet chocolate chips. Microwave for 2 minutes and stir until the mixture becomes even and smooth. Slowly mix in 1-2 tablespoons of Grand Marnier and pour into your cooled crust. Cover the chocolate layer with your toasty pecans and place into the refrigerator for an hour. Heating everything in the glass measuring cup just means one less dish to wash later, which is favorable if you hate dishes as much as I do.

Once the chocolate layer has set remove from the fridge and spoon on the cranberry mixture. You might want to use a strainer or a slotted spoon to make sure your pie doesn’t get soggy – you can always save the orange cranberry liquid for a sauce. After the cranberry layer evenly coats the top of your pie, place in the fridge for the next day or enjoy immediately! 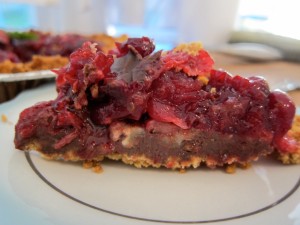 With the recent opening of lobster season in I’ve come to find the freezer packed full of spiny lobster (this is due to my roommate who tries his best to outwit these sneaky crustaceans and occasionally succeeds).  Yesterday Scott returned home from diving with two 2-lb lobsters – what else could I do but call dibs and make dinner.

The lobsters were steamed, chopped in half, cleaned, then thrown under the broiler.

The risotto was based on Giada De Laurentis’ Brown Butter Risotto with Lobster. Happily my first ever attempt at making risotto ended in triumph. I can see why people might say making risotto is a pain but if you follow the recipe it’s pretty straight forward, just don’t go stir crazy with all the stirring!

I needed something green to go with the starch and protein so I figured baked asparagus was an easy and healthy choice. The market had some beautiful green and purple asparagus. After tossing them in olive oil, I placed them on a cookie sheet covered in foil (making for easy clean-up). A little salt and pepper then into the oven at 400• for 20 minutes.

Right above the asparagus was a shelf with endives – I couldn’t resist. While quite bitter when eaten raw, grilling the endives brought the flavor to a whole different level. I brushed them with lemon juice and olive oil and threw them in the skillet over medium heat for 6 or 7 minutes. I decided to make a vinaigrette to go on top – mix all ingredients until emulsified:

I can’t wait to use the leftover vinaigrette on a salad tomorrow night… and bake… and make another risotto… more to come.

Because everyone and their mother has one, so why shouldn’t I?

(I think I was inspired this afternoon while watching Doogie Howser, M.D.)